After a year of renovation, the time has finally come: the more than 900 Hamburg-based employees of NEW WORK SE, which includes well-known names such as Xing and kununu, have moved into the new headquarters in the Hafencity. One of Germany's most exciting working environments has been created here, designed according to the needs of the employees. In total, there are 600 fully equipped workstations available. In the so-called New Work Harbour, there is hardly any traditional office space and no fixed workstations, but above all there are opportunities for communication and creative collaboration. Regardless of whether you need peace and quiet, want to hold a meeting or want to recharge your batteries by doing sport. "We have created a place that is radically different from the office as we knew it. The NEW WORK Harbour offers our employees a completely new working environment. In addition to spaces for exchanging ideas, collaboration and focused work, there are numerous places to relax and recharge," says Petra von Strombeck, CEO of NEW WORK SE. "Nobody is capable of being permanently productive; mental distraction is expressly encouraged here." 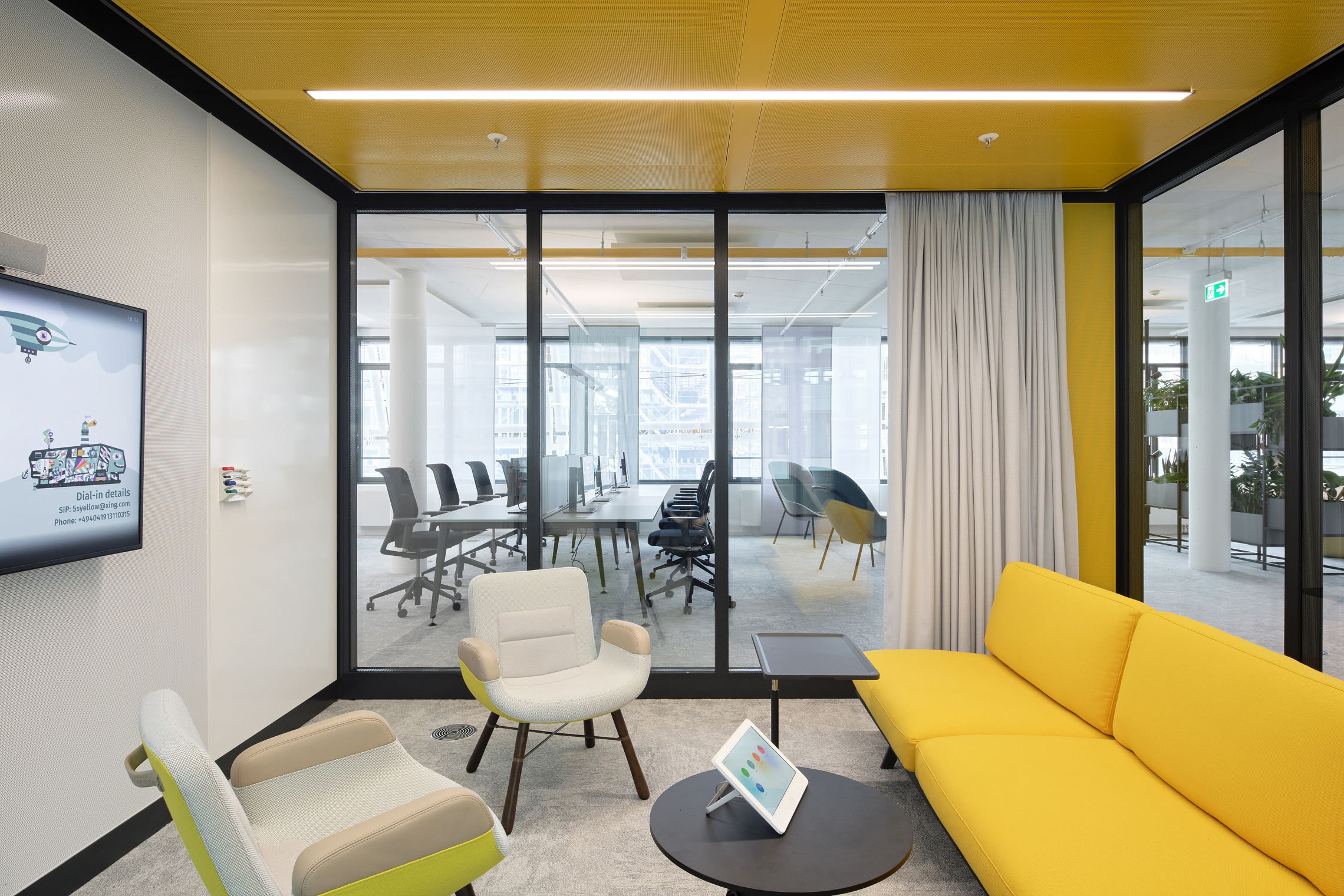 "If you want to be productive, you have to be allowed to recharge your batteries"

While floors two to five house flexible work zones for teams, the heart of the New Work Harbour beats on the sixth floor. The entirely new spatial concept offers numerous opportunities to work and relax according to personal preference. In keeping with the motto "If you want to be productive, you have to be allowed to recharge your batteries," there are over a dozen special spaces available for recharging and exchanging ideas. These include the Kiezkneipe, the Sound Bar with its huge record collection, and the Co-Creation Lab, where you can try out new things as a team. The view of the Hafencity, the harbour and the city from the rooftop terrace is spectacular – this is where new horizons open up - and not just in the yoga corner. The atrium on the first floor and the NEW WORK Pier are open to interested visitors. 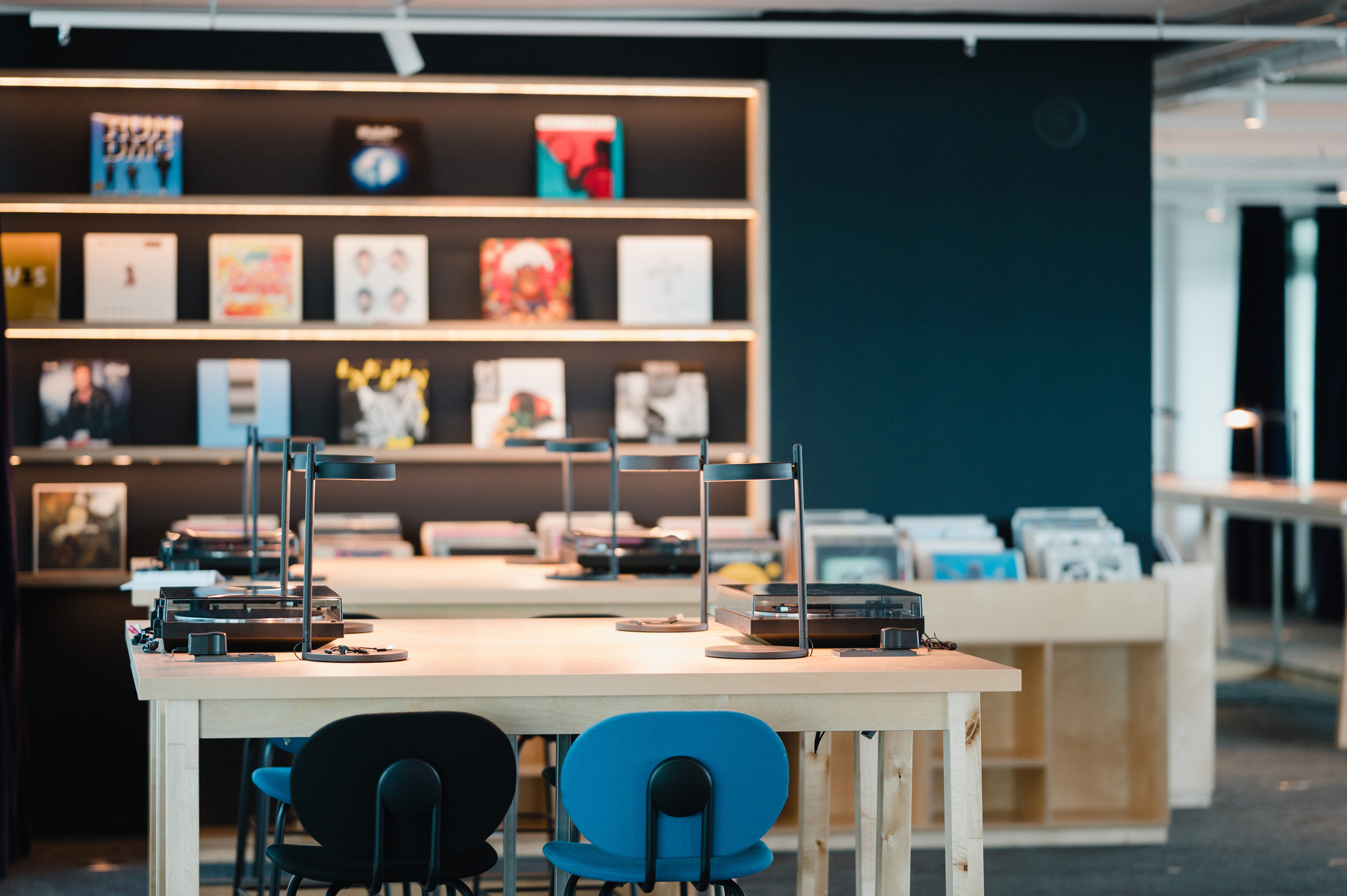 Employees played a key role in the design concept. The interior of the award-winning building, originally designed by the architectural firm Behnisch, was extensively redesigned. The design concept, developed by a project team from NEW WORK SE together with the architectural firm Schnittger Architekten + Partner, is based not only on the latest scientific findings as to what a modern working environment needs, but above all on the wants and needs of the employees. In addition to the project team, more than 20 so-called "change champions" from different parts of the workforce contributed to the conceptual design of the NEW WORK Harbour.

"Our goal was to develop an office that redefines New Work - both in its structural implementation and in everyday life," says project manager Kai Hollensteiner of NEW WORK SE. "Although New Work has, to a certain extent, been part of our reality for a long time, we have now taken this path even more consistently. We want to create a motivating, energetic working environment for our employees that enriches the working world after Corona - our office home" said Hollensteiner. "At the same time, we want the NEW WORK Harbour to further boost our attractiveness as an employer." 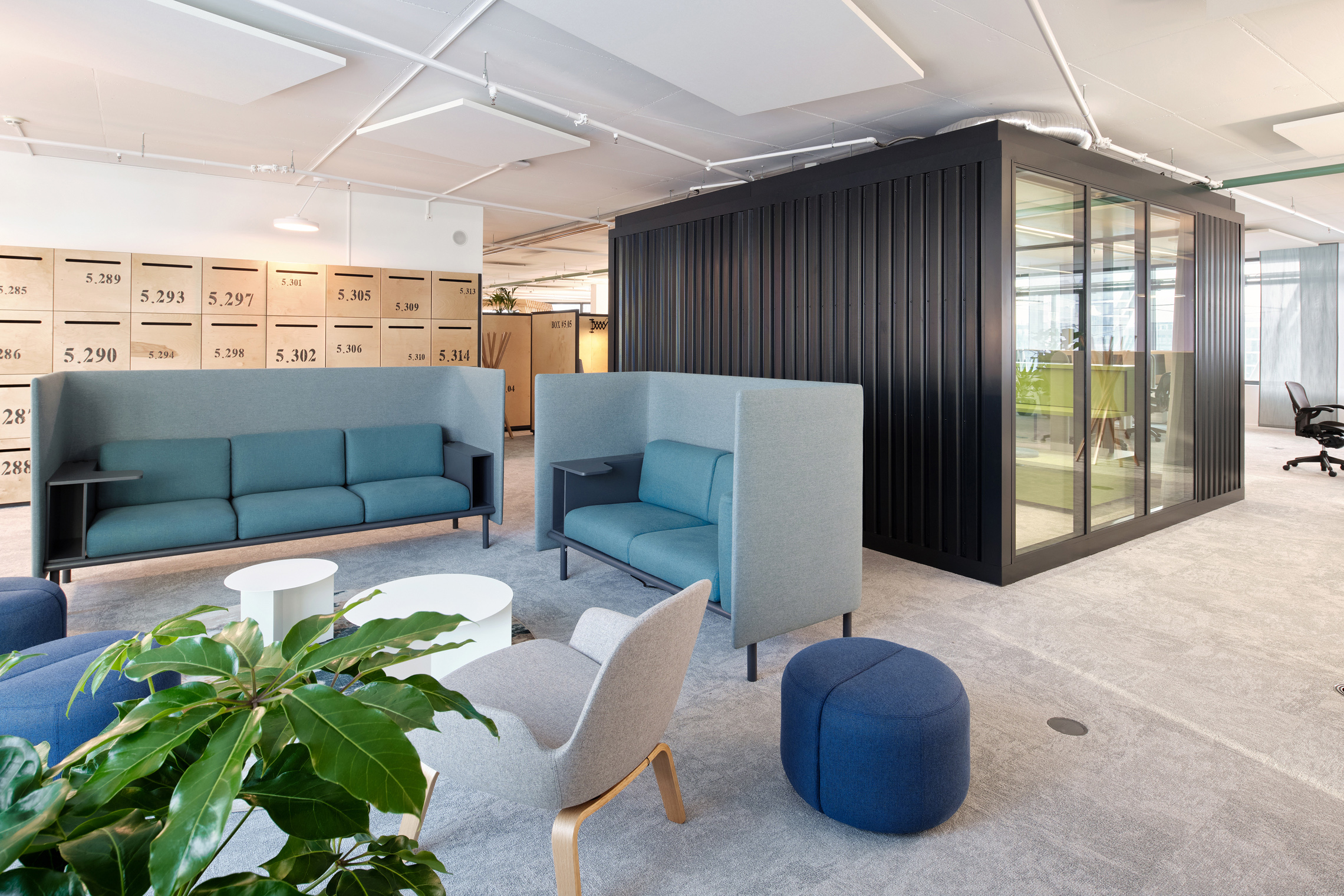 While the first floor with its open atrium architecture is freely accessible to visitors and offers direct access to the river Elbe, floors two to five are designed as work zones for the different teams. All the workplaces within these so-called "Team Neighbourhoods" can be freely chosen and are not permanently assigned to anyone. The Board of Executives also sit together as a team in an open-plan area; there are no classic individual offices. A total of over 600 fully equipped workstations are available that can be booked via a dedicated in-house app. Another 160 or so seats at "hybrid benches", fully equipped workstations with reduced IT equipment, are also used as workstations.

In addition, the NEW WORK Harbour offers a variety of agile team zones and quiet focus areas, designed for focused work. The design of the "Harbour" is so flexible that it allows new work concepts to be tried out and the space to be adapted to changing requirements. State-of-the-art technology is a matter of course, so that employees can also participate in workshops and discussions from their home offices. The offer is supplemented, among other things, by meeting and project rooms on each floor, soundproof boxes for private conversations or four-person seating areas with a table, like the ones we know from American diners. A covered outdoor terrace on the second floor also provides space for conversation and regeneration. 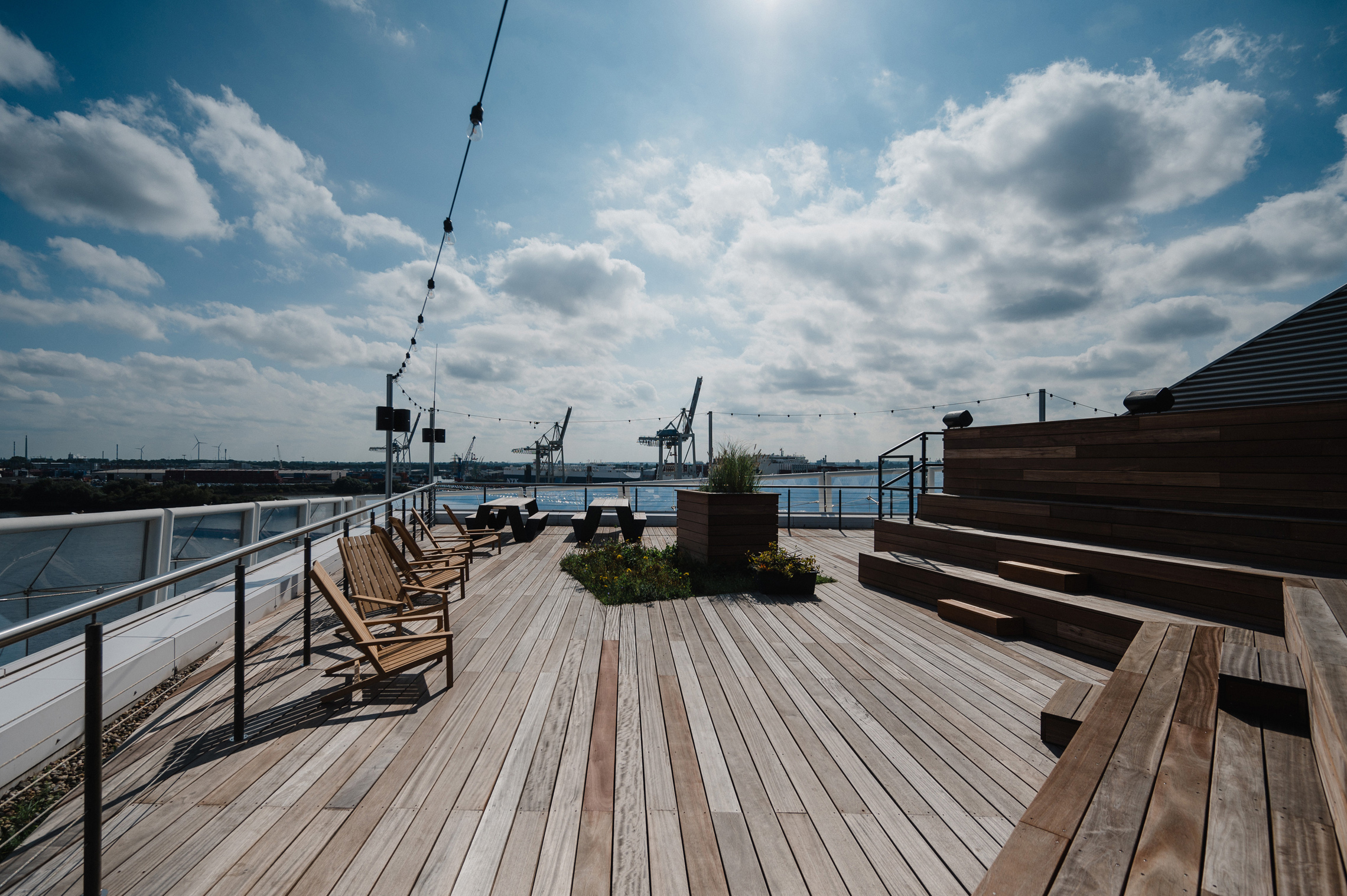 Things get a little different and particularly interesting on the sixth floor. It was developed with the support of the NEST ONE agency as a completely new spatial concept for flexible, creative collaboration. Here you can work sitting up, standing or lying down, alone or in a team, or simply recharge your batteries. The Kiezkneipe, with lots of wood and a relaxed atmosphere - inspired by the bars of Hamburg's Reeperbahn - invites you to exchange ideas with others. A special highlight is the rooftop terrace with its spectacular view of the Hafencity, Hamburg harbour and the city, which also has its own open-air yoga corner. The Sound Bar provides musical inspiration, complete with record collection and real instruments to play. You can browse in the Library, try out new things in the Co-Creation Lab or create something new as a team. The Fireplace Room on the other hand, with its cosy ambience, is the perfect place for deeper conversations. If you're hungry, head to the canteen on the first floor or cook together with the team in the event kitchen available there. In addition, numerous other rooms are available for various needs and functionalities, such as the Harbour of Silence, a quiet room where you can go to think, meditate or pray in peace.

"The pandemic has shown that, working from home means we miss the exchanging of ideas and physical closeness in the long run. We need a place where corporate culture comes alive. The NEW WORK Harbour complements our usual home office routine and aspires to be a place of work where people want to come, but don't always have to," says Petra von Strombeck. "New Work is not a static state here, but a continuous process that benefits from everyone getting involved and contributing." For this reason, the building will also be open to visitors and people interested in the topic of New Work after the opening and will be used for events in the future. The planning and conversion of the building took around two years. The remodeling itself coincided with the pandemic. The team responded to this in an agile manner and took the experience gained during this time to create an attractive environment for the working world of the future. 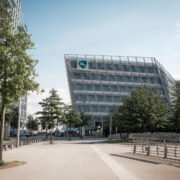 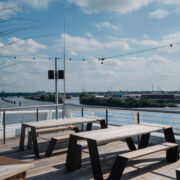 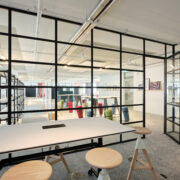 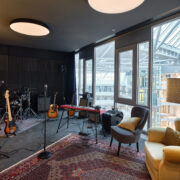 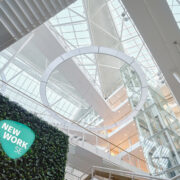 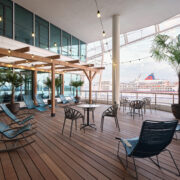